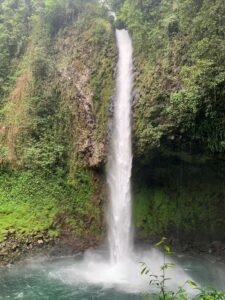 Having heard heard many good things about the Nicoya Peninsula in Costa Rica- a little outcrop on the Pacific Side. So of course we had to go check it out! So after doing our research, we settled on Volcanos, waterfalls, hot springs, and Tamarindo Beach.

We flew into Liberia Airport, which is not much larger than you local Target (haha). It took us just 10 mins to get through the airport and we were on our way to the La Fortuna region in the rain forests. Our first hotel was Nayara Springs, an elegant resort built on a steep hill over looking the La Fortuna Volcano. The service and accommodations were top-notch and they had serval hot springs that were all about 100 degrees. Ahhh! If you go there remember they have golf cart shuttles to get around the resort, because it is really steep and it is easy to get lost. The food was really good, and they put a lemongrass stalk in my Bloody Mary. We always love an interesting twist on a tried & true classic..

Upon awaking the next day, we set off to climb the foothills of The La Fortuna Volcano. The volcano’s had most recent eruption in 1969 So most of the vegetation has now grown back. We could see almost all the way to the top, but alas, the very tip was always covered in clouds so we couldn’t get a true money shot pic.

Our next stop was the La Fortuna Waterfall. When we reached the top of the fall, the guide told us that there would be 500 steps to reach the bottom! So we clomped down to the bottom and were able to take videos of this very large and beautiful waterfall and swim in the natural pools below. The rain was coming down hard, after all it is a rainforest. That evening, we visited the town of La Fortuna and eat at a local establishment by the name of Casa Fortuna. There we dined on Tuna Tartar, HUGE COWBOY STEAKS (yahoo), and a nice Chilean red wine (always get South American wine in Costa because it’s good and you get a great price.

Our next stop in the rainforest region was the Tabacon Thermal Resort & Spa known for best hot springs experience in Costa Rica. To be honest, we found the hotel itself (and the service) to be a little run down (not much Pura Vita). But we were ther for the springs! They were quite magnificent. There are a whole bunch of little waterfalls with steaming water that you can sit in and take natural showers. They even had a nice beer garden which we had to avail ourselves of- natch. So we enjoyed cheese burgers and a couple of the national beers- Imperial. It was still raining!!! 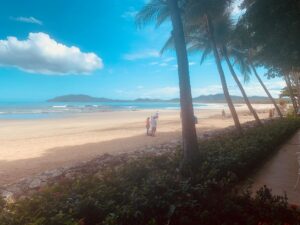 After all that rain it was time for some sunshine. We picked a small surfer town called Tamarindo. Note:  The volcano region is a long way from the beach, it took us almost four hours to get there. So if you want to combine the two regions, please be aware that you will spend a long time in a shuttle.

We checked in at Jardin del Eden Boutique Hotel, and were delighted to find it located just a couple minutes from the beach- but on a hill- so it was like an oasis perched slightly above the surfer party town. Only about $200 US dollars per night and included a beautiful breakfast and dinner with exceptional service. Ocean view by the way with a nice private balcony, and well-appointed common areas.

We went down to explore the town, and were found a beautiful beach with nice waves and really warm water. An abundance of beachside dining options where you could just hang out, dig your toes in the sand, relax, eat, and drink. They even have a microbrewery in Tamarindo called the Volcano Brewery (original name, I know!) Honestly their beer is mediocre at best, but we are used to US craft beer, which is the best in the world.

Our favorite restaurant was La Palapa, which has happy hour all day (aka two margaritas for $7, two beers $5). The food is fresh, well prepared with a seafood slant. We enjoyed a two pound Caribbean lobster, best we ever had! The other restaurant of note was Patagonia, an Argentine steak house. There we dined on prime filet mignons, sweet breads, empanadas, and Argentinean red wine.

Each day in Tamarindo, we would start our day with a cup of local Costa Rican coffee, and then stroll down to our beach and go body surfing in the large waves. After our swim, we would enjoy a massage from the local ladies on the beach (just $40 an hour). Then up the hill to the hotel for breakfast. Fresh squeezed juices, fruit, avocado, eggs to order, bacon, local jams and more. The head waiter Endy made the whole breakfast thing even more special. 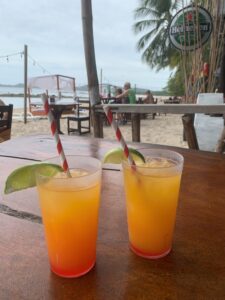 With our bellies properly satisfied, we would relax poolside in a cabana, which were always available. Next we would go to our private beach were we would buy coconuts from a beach vendor. He would cut off the top, we would take a couple swigs of the juice to make room for the local rum! I took three! After this local libation, it was time for lunch out on the street and then siesta.

If it sounds like all we did was eat and drink it’s because its true haha.

We ate dinner in the hotel most evenings, which was a choice of two entrees, two appetizers and a dessert. There was a nice selection of reasonably priced Chilean wines to wash it all down. Then it was time for bed. We usually went to bed around ten and woke up around five (it was broad day light).

Our take: We prefer the beach to the mountains. The mountains are a lot of driving, very rainy, and touristy. You can have a beautiful vacation just staying in the beach areas.

While we were down in the Nicoya Peninsula, we discover that it was one of the (8) “Blue Zones” in the world. A Blue Zone is where people tend to live much longer than any other area of the world. We would attribute this to the “Pura Vida” which translates to “pure lifestyle.” The natives are very relaxed, eat primarily local foods, help each other, and don’t over strive.

We are going to do more work on this blue zone thing, so we are playing a trip back to the Nicoya Peninsula to travel along the western coast all the way to the tip to a town called Montezuma. A yogi master- Richard Masla from Ayurvedic Institute in Florida- has told us it is magical and ahh-mazing 😊. Please let us know if there are any other areas of the world you would like us to report on for you! Pura Vida !