Pigging Out On The North Carolina BBQ Trail 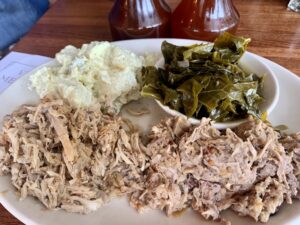 If you have ever watched the BBQ shows of Food network,,, and who hasn’t? …. then you may have become fascinated with the different styles of BBQ from across the country. I know we are!

So, we thought it is about high time we start tackling some of these BBQ destinations. We settled on North Carolina between the towns of Raleigh and Greensborough- part of the North Carolina BBQ Trail.

The eastern Carolina bbq sauce is vinegar based; unlike the tomato-based versions you will find in the Western Carolinas. And we were pleased to discover a very strong locally-sourced oyster game, and a plethora of craft beer breweries. So drool, drool let’s dive into it! 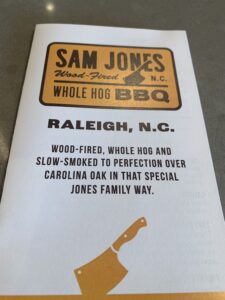 Day 1: We drove into Raleigh and

chose to stay at the Center City Marriot- walking distance to everything. After all that driving, we were thirsty and hungry.  On the east side of town, we found Transfer Food Hall with eateries, bars, and a brewery. Our first stop was Burial Brewery for some hazy IPA beers. Thirst being quenched,  we sat at the Local Oyster Bar and slurped down a quick dozen. With our appetites being properly tantalized, we could not resist the Mama Crow burger joint, where we devoured a chili burger topped with chili, Carolina slaw, mustard sauce, and homemade pickles.

And of course, we had to overdo it. So, we sampled the Lamb Curry at Chhote’s, an Indian Restaurant. Siesta time!

That evening we opted for the party zone on Glenwood Ave we were told by a local that it “gets crazy”. Glenwood ave. is littered with bars and restaurants of all cuisines. Many with al fresco dining and some with roof top bars.

We stopped in at Mexican restaurant called La Santa Modern Mexican Food.  We had “mezcalritas” garnished with a sliced of dried lime. at. The atmosphere was nice, bustling with patrons. The drinks were strong, fresh, and tasty. We order up guacamole and chips for the starter. The chips were great but the guacamole had a fizzy, 7up taste.  The chicken enchiladas with salsa Verde was serviceable. So there is probably better Mexican to be had in Raleigh, but it didn’t matter much since we had been “visiting” Glenwood avenue for two hours before the dinner😊. 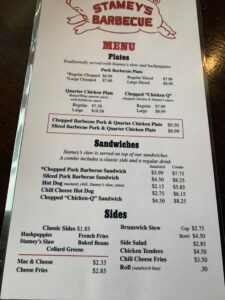 Day 2: It was time to to get serious about our BBQ. Raleigh’s Warehouse district seemed to be the best place to find barbeque joints. . First stop was Crank Arm Brewery to “crank” up our taste buds. We were the first customers of the day. Oops! We slurped down a sampling fight of 5 brews that were tasty, and well balanced. Now we were ready for some ‘Cue!

Just across the street was our first stop- The Pit BBQ Restaurant. The Pit had a mature, old-school feel to it. We gobbled up vinegary minced pork, smoked turkey, collard greens, potato salad, and of course hush puppies and homemade biscuits

We weren’t done yet, it was time for our second lunch. Just around the corner was Sam Jones BBQ that some of the locals said was good. We ordered up some St. Louis Ribs, baked beans, sweet slaw, and some suspect corn bread.  The St. Louis Ribs were meaty, tender, with a crusty bark. Yum! The homemade baked beans were sweet with an innocent tabled sauce. The slaw was a chopped cabbage with a sweet mayo dressing. I don’t know what they did to the corn bread, it had a dense texture and a pale, washed out color. With our BBQ jones temporally satisfied, we waddled back to the hotel for a proper nap. 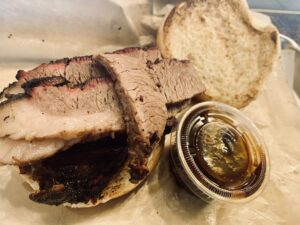 That evening we couldn’t do BBQ after our two lunches, so we went back to the food hall and dug into a peck of steamed oysters. They normally scoop the oysters out of the shell and put them in a bowl with garlic butter. In our humble opinion, steamed oysters are best left in the shell like steamed clams. Ask for the butter on the side with some lemon wedges.

Day 3: Next morning it was off to Greensboro. We checked in at the Hyatt Place downtown and we could see the minor league baseball Greensboro Grasshoppers right from the hotel window! Right down the street we found a brewery called Joymongers which had great beer. There was a Turkish food truck outside so we got a salad of baba ghanoush, pickled cabbage, hummous, falafel, lettuce and it was quite welcome after all that meat eating. 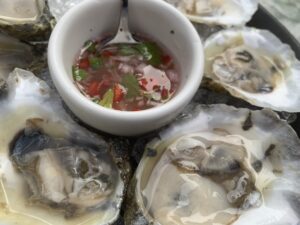 If it seems like all we do is eat and drink, it’s because its true! But we took a break that night because it was Sunday evening in Greensboro and EVERYTHING was closed. Pizza delivery and a Johnie Walker scotch tasting in the hotel bar.

Day 4: Two barbecue stops today. The first stop was Stamey’s, by many accounts the finest BBQ in Greensboro. The place looks like a BBQ joint should look and the servers were friendly down home gals. Stamey’s specializes in whole hog barbeque and quarter chickens traditionally served with hush puppies and vinegar slaw. The BBQ was good but the hush puppies were amazing, crisp and savory.

Next stop was City BBQ. City is a chain but they do smoke their meat on-premise. They have a wide variety of meats: pork (of course), brisket (hooray!), smoked turkey, smoked chickens, sausage, bologna and more. Honestly, we like City better than Stamey’s and their brisket was quite good (brisket is hard to find in the Eastern Carolinas). 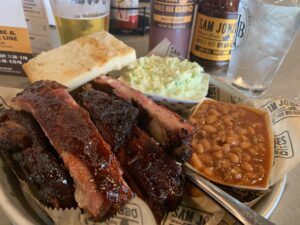 That evening- since our BBQ jones was more than satisfied- we decided to go fancy. Our local sources told us to go to White & Wood.  We are glad they did! From 5 to 6:30 they have ½ priced oysters and you can get them baked or on the ½ shell. We did both! Next came steak tartare with tater tots haha. They had a great wine program with each style of wine served in different shaped Reidel crystal. So we had to try several: an Armenian white, a Spanish rose, pinot noir from Oregon and a robust California Cabernet. Dessert was a butterscotch mousse with homemade toffee which was fantastic! If you ever make it to Greensboro, give it a try!

If you drive: Great restaurants on the way to your destination (or on the way home) make the drive so much more fun. We found Tidewater Grill in havre De Grace, Maryland with stunning views of the Chesapeake, great outdoor dining, strong margaritas and a really good crab cake. Ralph’s Barbecue in Weldon, North Carolina serves up a bountiful barbeque buffet. Smithfield Chicken N BBQ is a chain, but it’s pretty good, always close to I-95 and a lot better than McDonalds!